The Sun Chariot Stakes is the feature race of Sun Chariot day at Newmarket Racecourse each October.
A race that always attracts a strong field despite often clashing with the Prix de l’Arc de Triomphe meeting in France.
Open exclusively to fillies and mares aged three years or older, horses from across the United Kingdom, Ireland and France regularly make the trip to Newmarket for the big race.
Despite its prominence in the racing calendar, its not a race that usually has an ante-post market open all year round, but that doesn’t stop there from being huge betting interest once the entries are made.
Following the 48-hour declaration stage, we will have our very own tips for the Sun Chariot Stakes, including our fancy to win, finish in the places and an outsider who could cause a shock. 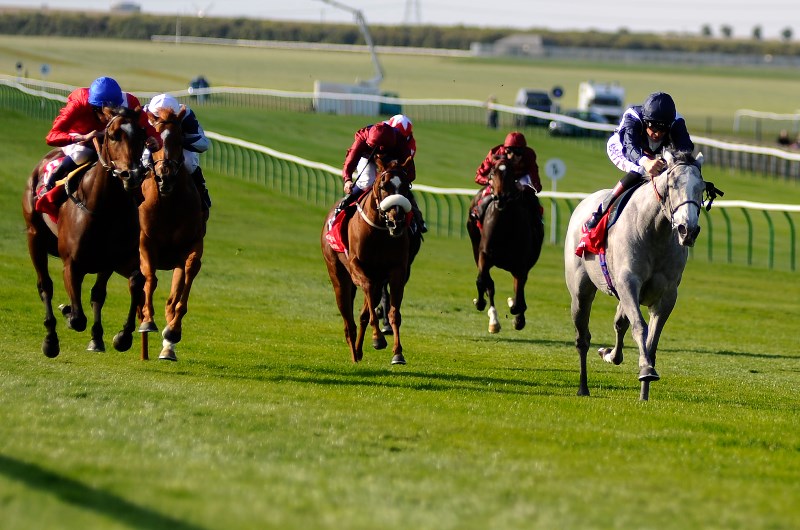 The odds on the final field won’t be available until the declaration stage, but the early markets are a good guide to how things could pan out come race time.
The latest odds will then be available here:

A busy Saturday of action will always attract the punters, especially to big races like the Sun Chariot Stakes.
Newmarket is affectionately known as the ‘HQ of British horse racing’ and that means bookies are battling it out to get your custom whenever the feature action is held at the course.
Bet365 are highly recommended for their offers and bonuses and are sure to have something to offer for this famous Group One.

We have 2020 Sun Chariot Stakes Betting Tips available, where an even field will line up for the Group 1 title.

The field for the Sun Chariot Stakes at Newmarket won’t be confirmed until the declaration stage which is two days before the race, usually around 10:30am UK time.
Any runners for the ownership trio of Tabor, Smith and Magnier, better know as the men behind Coolmore, is well worth noting.
As of 2019, they are leading owners in this race thanks to victories with Halfway To Heaven in 2008, Alice Springs in 2016 and Roly Poly in 2017.

Eight of the last twelve winners of the Sun Chariot Stakes were from the top three in the betting and three of the last four winners were the starting price market leader.
That makes this a race for the favourite backers and punters can be rewarded by sticking with the top end of the market.
Laurens was a well backed winner at 11/4 in 2018 and the same goes for Alice Springs at 13/8 back in 2016.
In fact, there hasn’t been a winner of this race at odds bigger than 4/1 since Siyouma clinched success for France in 2012 at 12/1.
However, for those that like to do more than just follow the betting market, course form at Newmarket is a big plus for runners in the Sun Chariot.
Ten of the last twelve winners have had a least one run at Newmarket, and eight of those have had a winning appearance at HQ.
The Matron Stakes at Leopardstown can often be a decent guide to the winner of this race without being brilliant.
Four of the last twelve winners had also won the Matron Stakes before landing the Sun Chariot, so that is worth baring in mind if you’re doing your homework.

Racing fans wishing to watch their fancy can do so through the live streaming feature at Bet365.
The well-recognised bookmaker shows all UK and Irish racing as long as you have a positive balance or have placed a bet with them in the last 24 hours.
To start enjoying the live streaming service ahead of the Sun Chariot Stakes, just sign up with Bet365.

The Sun Chariot Day at Newmarket is a big day in the Flat racing calendar and one of the biggest in the Autumn part of the season in the United Kingdom.
Below are all the details of race times for the Sun Chariot Stakes including six other supporting races on the card.
Date: 4th October 2020
Time: 3:25pm
Track: Newmarket
Distance: 1600m
Conditions: Fillies & Mares Stakes Race
Age: 3YO+
The Sun Chariot Stakes is one of seven top quality betting heats, which also includes other big races for the Fillies’ such as the Middle Distance Handicap Stakes final and the Fillies’ Series Handicap Stakes final.

Named after Sun Chariot, the winner of the fillies’ Triple Crown back in 1942, the Sun Chariot Stakes is a race that has been drenched in racing history over the last 50 years and more.
Established in 1966, it was a race that was originally contested by three-year-old fillies and run over the extended trip of one mile and two furlongs.
Under those conditions it was enhanced to Group Two status in 1971 and was then opened to older horses in 1974.
Fast forward a few years and at the turn of the Millennium, the Sun Chariot Stakes was cut back to be a one mile event and four years later was promoted to Group One level.

When is the Sun Chariot Stakes?

What time is the Sun Chariot Stakes?

Where is the Sun Chariot Stakes held?

Newmarket is the home for the Sun Chariot Stakes and many more of the UK's top Group 1 races.

Who is the current Sun Chariot Stakes favourite?

2018 winner Laurens currently heads the betting for the 2019 Sun Chariot Stakes over a host of each-way chances.

Billsdon Brook was too good for the opposition when scoring a comfortable win in the 2019 Sun Chariot Stakes.